“Think of me, think of me fondly, when we said goodbye…”

Phantom of the Opera, by Sir Andrew Lloyd Webber. Do you remember seeing this musical with me? I don’t even remember what year it was. Perhaps 2000, or 2001? It was on tour in Portland and you asked me if I would want to go see it with you.

Let me just take a pause for a moment to think about my response, “Ummmm, YES!”

For years we had listened the original Broadway cast album with Sarah Brightman, Crawford and Bartman. Over and over, and over again on road trips and to and from places around town. I loved singing and trying to embellish lyrics on the soprano songs. It was one of the musicals at the time that was taboo to sing at auditions or at recitals, “Too over done…tsk, tsk, who do you think you are? Sarah Brightman?”

Well I never listened to that. I ended up performing the role of Christine at a child’s birthday party in 2004. Yes, I said birthday party, that was correct. The parent was a bit indulgent shall we say. It was my first paying gig and I was absolutely thrilled. Someone has a home video floating around their shelves in Beaverton…not sure who or where. But the evidence exists. I wore my bridesmaid dress and earned a few hundred dollars to glide down the stair case and sing songs I loved. What’s not to love about that?!

Back to the memory. There I go digressing. Story of my life I’d say. 🙂  “The road less traveled…” Oh, whoops, there I go again.

I was absolutely thrilled to see the production with you that spring day. I can keenly recall mom and dad seeing it when I was about 9 or 10 in Anchorage, 1993 or 1994. Mom said I was a bit too young to see it because of the ‘scary’ elements in the production. I had heard about the chandelier falling and the whole mini-explosion bits here and there. I could not wait to see the spectacular with my own eyes. I can remember sitting in the Keller Auditorium with you, anxiously awaiting the beginning of the production. We flipped through the concert program and read through biographies for the performers and musicians.

That faint chiming started and that melody that I can hear in my brain now, then the auction scene began. Finally the chandelier and that grand organ sound resounded. Chandelier glides upwards above the stage. Not over the audience yet, my heart still jumped into my hands, ok mom was right. 🙂

I don’t care what any one else thinks. I’m sorry, I think Sir Lloyd Webber did a spectacular job with his production. I absolutely adore the musical and am thrilled any time I hear the tunes. I know it’s rather faux pas or what not amongst the musical theatre community to be forthright with my accolades and taste. To each his own thought I say! I don’t know anyone personally that has written a musical that well done, performed THAT many times, and with such a resounding crowd pull for every show. Perhaps it is also the element of Paris that intrigued me ever so.

Having been lucky enough to spend time there, I can see why. It was a musical, architecturally enthralling, and culturally immersing city to experience. Perhaps one day we could share the experience together Debbie?! I would love to roam the streets of Paris with you and paint at the top of the Montmartre together. There is something to be said about being in Paris and enjoying what the city has to offer.

Thank you for the musical tapes, the musical production memories, and for sharing these glorious experiences with me. I can’t wait to see a musical with you again soon. I love you ever so! 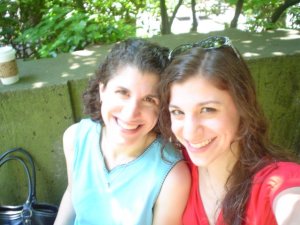 This was a photo taken outside of the Keller, circa 2007-ish before enjoying, “Avenue Q.” Yet another musical you introduced into my life. 🙂